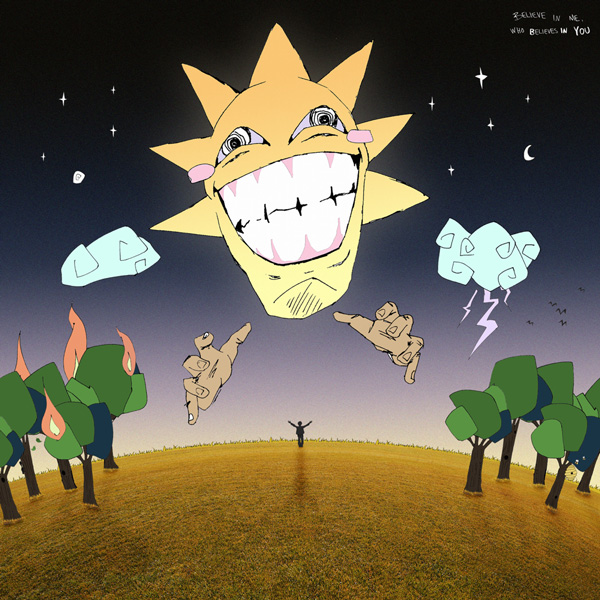 Aries has now dropped two albums, WELCOME HOME, which dropped in 2019, and BELIEVE IN ME, WHO BELIEVES IN YOU. In comparison to WELCOME HOME, BELIEVE IN ME, WHO BELIEVES IN YOU displays Aries’ developed artistry and matured sound. We expect Aries to maintain this steady growth over the next few years and we are excited to see where this growth leads the young musician.

Keep Aries on your radar because he is here to stay. Read about the tracks you should listen to on BELIEVE IN ME, WHO BELIEVES IN YOU below:

Songs you should listen to:

‍
“BOUNTY HUNTER” is the first track on the album for good reason. With a massive chorus and outlandish production, listeners are drawn in from the first 10 seconds of the song. The song features a bright acoustic guitar pattern and a booming 808 that show the ease in which Aries melds non-traditional sounds together. This unusual talent results in Aries unforgettable, genre-bending sound.

The grungy electric guitar and Aries’ beautiful vocal melody start “DESPERADO” off with a bang. Tension grows within the song until it explodes at the start of the chorus, leading to a euphoric vibe that features pumping drums and nonchalant vocals that fuse effortlessly. With a vibe similar to that of “KIDS ON MOLLY,” this addictive song has multiple layers that make it extremely special.

“ONE PUNCH” is one of those songs that just makes you feel great. The genius of Aries’ music is on full display through the entirety of the song, with purposeful engaging sounds that draw listeners in. “ONE PUNCH” was the last single that Aries dropped in the build up to BELIEVE IN ME, WHO BELIEVES IN YOU, and it was the perfect transition into the album.

Songs you should skip:

‍
I am not kidding when I say this, there are no skips on this album.

Next up for Aries is his “BELIEVE IN ME, WHO BELIEVES IN YOU” world tour. From January 15th, 2022, to March 23rd, 2022, Aries will play 37 shows through Europe and North America. Aries will be joined by fellow upcoming artists Verzache (Europe) and brakence (North America). He’ll be performing his flawless new album, bringing his usual energy and flair to each show.

Get your tickets for the upcoming tour here, and listen to BELIEVE IN ME, WHO BELIEVES IN YOU below.