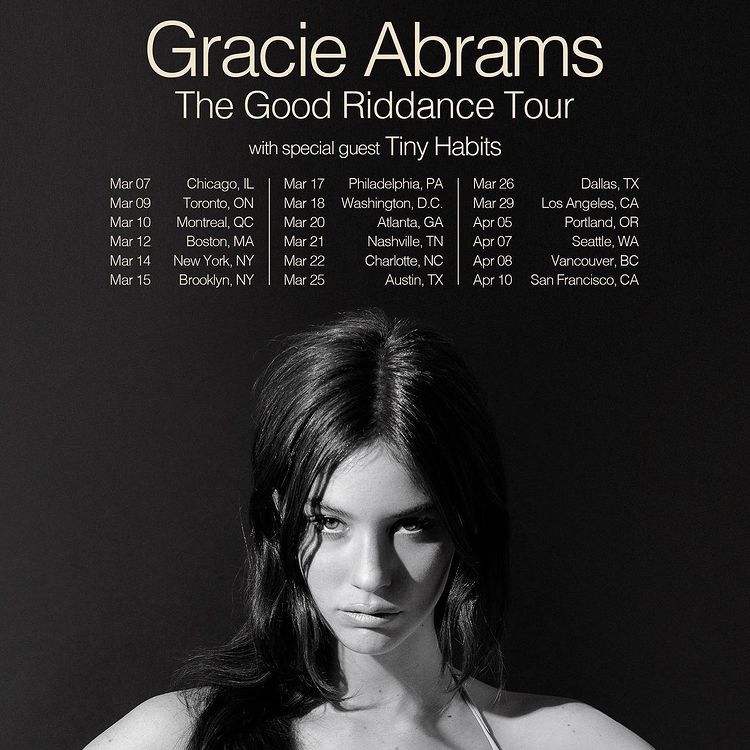 It's been a week to celebrate for Gracie Abrams fans: the 23-year-old singer shared lead single “Where Do We Go Now,” announced the release date for her debut LP, Good Riddance, due February 24, and announced a headlining tour for the spring. Only a select few were able to celebrate in full, as tickets for The Good Riddance Tour sold out almost immediately. The mad rush to hear Abrams live and in-person is no surprise based on her catalog, where her songs are sappy without the drama, substituted instead with sober romanticism.

As her fan base grows, as does Abrams’ network: The National’s Aaron Dessner serves as producer on Good Riddance, and earlier this winter Abrams was revealed to be an opening act on a number of stops on Taylor Swift’s The Eras Tour. Beginning in March, The Good Riddance Tour will make 14 stops and perform 21 shows. Not only opening but complimenting Abrams will be Tiny Habits, a Berklee College of Music outfit revered for their intimate covers and original recordings. Only a few weeks into the new year, Gracie Abrams has nearly filled her calendar with obligations. Though the shows are sold out, it will be hard to miss out on what she has planned.

Why You Should Watch ‘Untrapped: The Story of Lil Baby’ on Prime Video