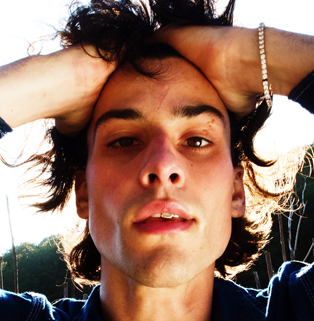 I first discovered Noah Guy when he released his single “5 MO’ MINUTES,” and admittedly, it took less than five minutes for me to be shamelessly intrigued with the emerging Philadelphia, PA artist. Emanating eccentricity and subcultural aesthetics, Noah Guy has become a paradox outside the mainstream music scene, distinguishing himself through his obscure lyrics and retro style. His new release, “Small Talk Carolina,” follows his previous discography in that it constitutes a contemplative journey during which nothing seems self-explanatory. Incorporating accompanying wind sounds, The Spirit of New Orleans Gospel Choir feature, and a cloudy chorus that chants “to not be Carolina” leaves a lot up for interpretation. While Noah Guy is one to drum to his own beat, the rising singer shows us that you don’t have to understand the art to appreciate the talent behind it.

A testament to his flexible vocal range, Noah Guy ambitiously plays with the limits of his creative originality in his most recent release. The song begins with an echo of futuristic sounding strains, however, as the song transitions into the first verse the artist naturally falls into his floating vocals that counter the minimal instrumental behind him. While some artists may fall into the background of an overpowering production placement, “Small Talk Carolina” is intentionally vigilant towards the rising artist's powerful extended vocals and his ability to verbally paint a picture.

Endearingly humble with his delivery the song slowly becomes a visual of any typical small town. About halfway through the track, listeners hear a swift transition from Noah’s airy vocals into a verse showcasing The Spirit of New Orleans Gospel Choir bringing together notions of religious reinvigoration and blues sounds undergirded by the use of banjo sounding riffs and wind instruments. Although the meaning of the song is ominous and maybe a secret only Noah allows himself to know the true answer to, “Small Talk Carolina” feels like a peaceful drive away from the city. Of the few to experiment with gospel and indie sounds, Noah Guy helps us all take a deep breath and focus on the beauty of raw simplicity.

While many of Noah Guy’s previous releases have been disharmonious and rambunctious in the way that indie and alternative songs often are, “Small Talk Carolina” veers from the artist's wilder side instead opting for a tame and almost reluctant track that turns on a mature examination of life.

Get To Know Emei [Interview]

Who Is Ava Beathard?