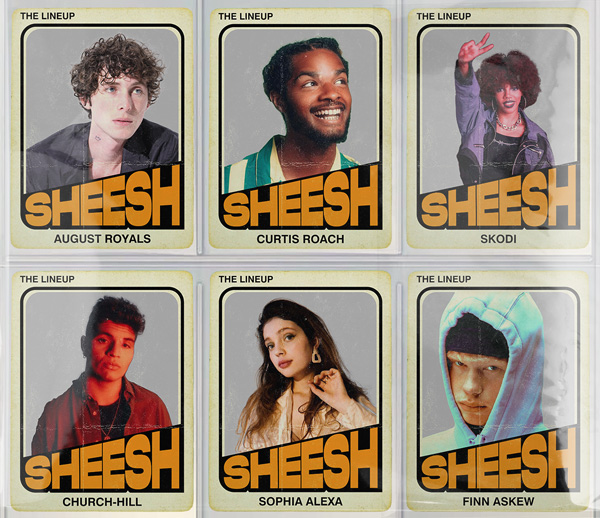 Fall is fully in the air, but before the bombardment of costumes likely coming from the Netflix show Squid Games for Halloween this weekend – we squeeze in some new faces for this month's Lineup. Learn more about each rising artist below.

The Los Angeles based and Georgia-born artist, August Royals, just recently started releasing music on streaming services in July with the single, “Blue Football.” His recent release, “Prada” showcases how anthemic and unique his vocals are, giving me the vibes of Still Woozy-inspired production with the experimental flare of Brockhampton.

He is already making a name for himself with a co-sign by Brockhampton’s front man, Kevin Abstract. August recently signed with RCA and is working on releasing his debut project, Inhaler — co produced by Ka and executive produced by Kevin Abstract. August Royals is perfect for those who want to relax and listen to soothing tunes but still want a hint of experimentation. – Ian Hansen

It’s no secret that TikTok has changed the speed artists can rise up in the music industry. Countless musicians have gone from unknown to topping the charts on the heels of a viral TikTok sound. Detroit rapper Curtis Roach is a beneficiary of TikTok’s viral nature, as he released “Bored In The House” in the thick of COVID-19. If you live on planet earth, you surely can remember the “Bored In The House” TikTok sound that dominated the first few months of the COVID-19 lockdowns. Many times it can be hard to differentiate one-hit TikTok artists from TikTok artists with the prospects of a long career. As for Curtis Roach? Well, he hasn’t missed since his viral moment.

When Curtis Roach released “STIMMY” this past summer I knew he was the real deal. Delivering a catchy hook between quick articulate verses, he solidified a sound that is both refreshing and infectious. The 22-year-old rapper most recently dropped “COMMA$,” which instantly became my favorite track of his. Oozing confidence over a bouncy, whistling beat, he provides listeners with his patented loose flow and high-energy. An uncanny ability to create simple sing-a-long hooks ties this one together perfectly, before Whyandotte drops in to deliver the second verse.

Consistently rattling off singles since 2020, Curtis Roach has steadily leveled up. After listening to tracks like “STIMMY” and “COMMA$,” I’m patiently awaiting his next release. You may ask me, “Joe, Curtis Roach only dropped one song in October? How did he make the October lineup?” Well, that one song is that good. Stream “COMMA$” below. – Joe DelloStritto

Skodi enters the lineup this month, with one of the most diverse and magnetizing tones we've heard in rap this year. As many rappers tend to ride the beats they spit on, Skodi has a flow that reverses this notion, with the beat having to keep up with Skodi's pace. Her flow is effortless, signified by a bouncy glide in her pronunciations. In her single, "Bad," you hear Skodi matching her word play with eclectic beats, detuned synths, and aggressively hard 808's, physically forcing at least a slight head nod upon listening.

Although inspired by some of rap's legends, I can confidently say I haven't heard an artist directly comparable to Skodi. In "Cheesecake Freestyle," Skodi shines with her wordplay and lyricism, yet shows a melodic style in the chorus that inescapably seeps into your subconscious. Similarly in "Sauce EM UP!," Skodi continues to show her knack for making catchy, almost nursery rhyme like melodies – with one liners that wouldn't shock me if TikTok were the reason they hit the mainstream. With an upcoming performance at NY's Rolling Loud Music Festival this weekend, Skodi is on pace to be Miami's next rap star. Welcome to the October Lineup. – Perry Avgerinos

Sporting a crisp and vibrato-infused vocal pallet, Church-Hill reminds me of the perfect blend of Post Malone, and Juice WRLD, with his own unique twist. The Northern California-based artist crafts energetic atmospheres with ear-candy production, entertaining layered vocals, and a vision for storytelling. His effortless swag and in-tune lyrical delivery speaks volumes about his experience as a Californian teen, and engulfs us in his world. At 19-years-old, Church-Hill has already proven his ability to deliver timeless tracks.

Debuting in 2020 with “History,” a bright, synth-based single with Instagram-caption perfect hooks, we immediately saw the potential for the ultra-talented songwriter. Just over one year later, we now hear Hill exploring some of his oldest standing influences, ranging from The Killers to Still Woozy. In his most recent release, “Vinegar,” featuring Half Moon Bay, he freshly blends elements of indie-rock with melodic hip-hop, proving to us that exploration and growth is a major element of his plan. If you’re ready to sit down and put an artist on repeat, Church-Hill is a perfect choice for you. – Miles Opton

Singer-songwriter Sophia Alexa is a young talent with an old soul. Based in London, the half-German, half-American Amsterdam native has been writing poetry and songs since she was a little girl. Growing up, her musical influences include classics such as Joni Mitchell, Carole King, Stevie Nicks, and Neil Young.

She recently dropped a minimalistic yet glorious debut track, “House Of Cards,” that instantly caught out attention. Through the song – there is a clear influence from her idols, with folk-inspired pop sounds that tell a story through her soulful voice. She is currently working on her debut EP, but if “House Of Cards” is any indication of what to expect, it cannot come soon enough. – Lea Dince

Since the 20-year-old artist started releasing music in 2020, Finn Askew has become one of the most promising artists in music. His unique creations have been described as ’indie sound, washed one moment in a rosy hue of pop and the next to a high, RnB sheen.” With over 20 millions streams on Spotify, the rising artist has quickly risen to internet fame through his enchanting melodies and gleaming vocals.

Growing up in south-west England, Askew was exposed to a vast array of musical genres that can be heard through his music today. Further, he is not held down by any one genre saying, “I don’t ever want to be defined by one genre - I’ve always said it from the beginning.” After falling in love with music through listening to his parents CD’s that included bands like Nirvana, The Smith’s, and The Beach Boys, Askew started making his own music as a young teenager.

At 16 years old, Askew created his song ‘Roses,’ which is his most streamed single to date. With over 16 million streams, the GarageBand-crafted song stands out amongst other releases due to its originality and genre-twisting nature. Global superstars from Thailand to South Korea have even endorsed the young artist, bringing in an influx of new listeners from across the world. Finn Askew will rise to the top of the music industry. He has only released music for two years, and has already topped numerous countries’ music charts. Give Askew’s music a listen, his authentic sound and pristine voice will make you an instant fan. – Nate Fenningdorf

Check back in next month for November's Lineup, only on Sheesh. For weekly new artists, see our Friday Finds updates on Spotify.

The Lineup: The Best 6 Artists of September 2021