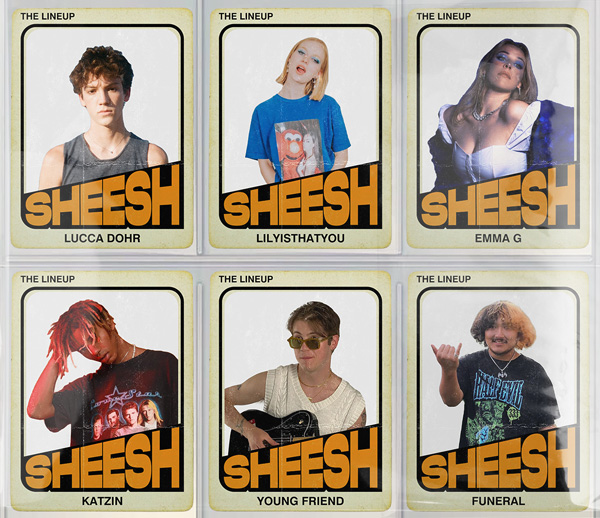 We're back with our July Lineup – featuring the best six artists each month. Learn more about each artist, and dive into our recommended tracks below.

Lucca Dohr has proven with each new release that he’s got the pen and intangibles for the making of a superstar. Though with little music out, Lucca has started to catch the attention of many, currently sitting at 131,152 monthly listeners on Spotify. Lucca’s versatility has also been on display as of recent. While “SG Lou” and “Loosh98” defined his early sound as indie-acoustic ballads, Lucca has delved into more of an indie-pop sound with his latest release “Winter’s Coming," aided by production by Ben Chandler of Atlantic Records.

Overall, The LA based artist has consistently proven that he has a knack for ear-worm melodies and penning thoughtful lyrics, and it seems there’s nothing stopping him from being in the conversation with the biggest indie stars out right now. – Timothy Weber

‍If you spend any time on TikTok, chances are that you’ve heard Lilyisthatyou. Her video sharing the track, “FMRN” amassed massive attention, going viral in a matter of a few hours. But 24 hours was all it took for TikTok to take it down. Though TikTok cited an “internal error,” many pointed to the risque lyrics as the likely cause. But maybe this “blip in the system” wasn’t such a bad thing.

As the Toronto singer unapologetically sang the title’s acronym in full (if you don’t know what FMRN stands for, figure it out for yourself), she unknowingly sparked a micro-rebellion. Overnight, thousands of people were begging for the artist to release the track in full, and questioning why her original video was taken down. In a recent interview with Early Rising, Lily shared, “The song has gained a new meaning to me. One of flourishing in your own desires regardless of those ignorant to what that means to women.” TikTok may have held her back for a moment, but it only fueled her fire further. In her unapologetic and blunt expressions of sexuality through the track, she tells a story of chemistry and unhindered self-expression. One that is bold, vulnerable, and not to mention catchy.

The 20 year old singer is obviously not one to shy away from such vulnerability. Her music can only be described as raw – with powerful vocals and explosive pop production, Lily touches on taboo subject matter while avoiding cliches and expectations. She navigates her music and herself with a sense of pride for her experiences and desires, putting everything out there. With close to four million streams on her only Spotify single, Lily is a force to be reckoned with, and an artist who is quickly paving the way for female expression in the industry. – Audrey Brandes

It’s pretty rare for an artist, especially one within the first year of their career, to be able to develop and hone a carefully-crafted sound that ends up rivaling many of their peers. Emma G, however, seems to know something we don’t – because with only two tracks under her belt, she’s built up a burgeoning, yet devoted fanbase and has no intention of stopping.

Released earlier this year, “Like You” is a late-night banger perfect for hazy nights paying 17$ for a vodka soda in the club, or speeding down the PCH with your friends. Heavy basslines give Emma G’s style her own signature bounce, which when paired with her incredible vocal talent, is borderline unbeatable. If I happen to fall into a coma after writing this, please swap my IV bag with a speaker playing her latest single “Leveling Up." Sounding like if Ariana Grande grew up on Telegraph Ave, Emma G delivers her own unique sound all in a lane of her own. Alongside artists like $avvy and Cosette, Emma G is busy working hard to put Nashville’s rising music scene on her back.

Though right now she’s likely plotting her next move while meticulously working on her intricate vocal layers, now is the perfect time to become a fan. Play “Like You” at the next function you pull up to and you’ll instantly understand Emma G’s immense charm and promise. – Carter Fife

New York’s Katzin is penning blissful alternative pop songs perfect for the summer. With only 3 songs in his discography, the singer/songwriter is just beginning, but already showing unrivaled potential. His debut single “playboy” is a colorful pop song with an incredibly catchy hook over an acoustic instrumental. His sophomore release “Frankenstein” is equally as captivating as Katzin showcases his incredible vocal range and ability to hop over a wide range of instrumentals.

Both “playboy” and “Frankenstein” sound like they are laying the foundation for something bigger. This came in the form of Katzin’s most recent single, “Getaway.” This single has all the makings of a widespread hit – a catchy hook, a stunning vocal performance, and stellar songwriting. “Getaway” not only proves that Katzin has no ceilings, but it cements Katzin as an up-and-coming songwriter to watch.

It’s unclear where Katzin will creatively go next, but if “Getaway” is any indication than it’s well worth anticipating. Check out Katzin’s music now because he will likely be on everyone’s radar in the coming months. – Tyler Borland‍

Up-and-coming singer, young friend, truly lives up to his name: painting a picture as if his listener’s just met their newest replay artist. Based out of Vancouver, the 21 year old – born Drew Tarves – produces tracks which live out their summer-time themes. With millions of streams, there’s no question why “young friend” is next up in the underground music world. Tracks like “PINCH ME,” “SUGARCOATED,” and “ARIZONA” combine his effortless vocals with catchy guitar riffs: the latter two come full circle when their added features’ (Anna Sofia and ella jane’s) seductive tones become the basis for overall perfected tracks.

You made me brand new again.

July, We're in the car, the radio on,

You tried to turn it off, but I can't move on.”

With a distinct indie feel (and Tarves’ personalized touch), “ARIZONA” has rightfully become one of the singer’s most streamed tracks to date. While he has yet to release a full-length album, that’s something on the horizon – something to hope for. young friend’s discography is flawless, as is his vocal form. Fans are certainly taking notice, and Tarves hasn’t even started yet. – Ian Tsang

At this point, you’re probably tired of hearing about hyperpop – and I don’t blame you. The past year has seen new artists flocking to the genre like Caucasians to a Tyler record (guilty) – and though the culture is alive and well, it seems to have hit a musical lull over the past few months. Luckily, some artists in the broader hyperpop scene seem to be more than happy with stepping in and infusing their own unique and seasoned talents into the genre – and none stand out more than North Carolina’s very own funeral. He’s not necessarily a new name for those with their ears to the ground – but with the release of his debut record superplastic earlier this month, funeral is definitely making a strong case for being somebody to keep an eye on.

Though previously described as occupying the ‘broader hyperpop scene’, it’s definitely a challenge to pin down funeral with respect to a genre. Some tracks carry an infectious and sinister high-octane electricity, while others sound like atmospheric and ambient lullabies that are equally well-produced and drug-infused. For fans of the former, look no further than superplastic, as funeral (neé Zuniga) provides listeners with 10 tracks of digicore-meets-hyperpop bangers that showcase not only his immensely envious potential, but his versatility as well.

For the more low-key bangers, last year’s “trying//cry4help” is an excellent example of both funeral’s carefully-honed vocals, and also his masterful affinity for production. It sounds like cybertrash, Crystal Castles, and Cashmere Cat all had a child together that was also a prodigy on DAWs. Soft piano melodies find their home alongside lurching bass signals on funeral’s “trying//cry4help”, and with a composition this intricate and meticulous, it’s no wonder his sound has resonated so well with the hyperpop audience.

With more music likely planned for the future, funeral is without a doubt one of the most promising hyperpop artists out right now. Following a handful of already infectious singles, his latest record superplastic is sure to win over even the most hard-headed hyperpop stans. Whether you’ve been following funeral since the beginning, or if you’re just being put on right now, put on superplastic and watch it slowly take over your weekly rotation. You won’t regret it. – Carter Fife

Check back in next month for July'd Lineup, only on Sheesh. For weekly new artists, see our Friday Finds updates on Spotify.