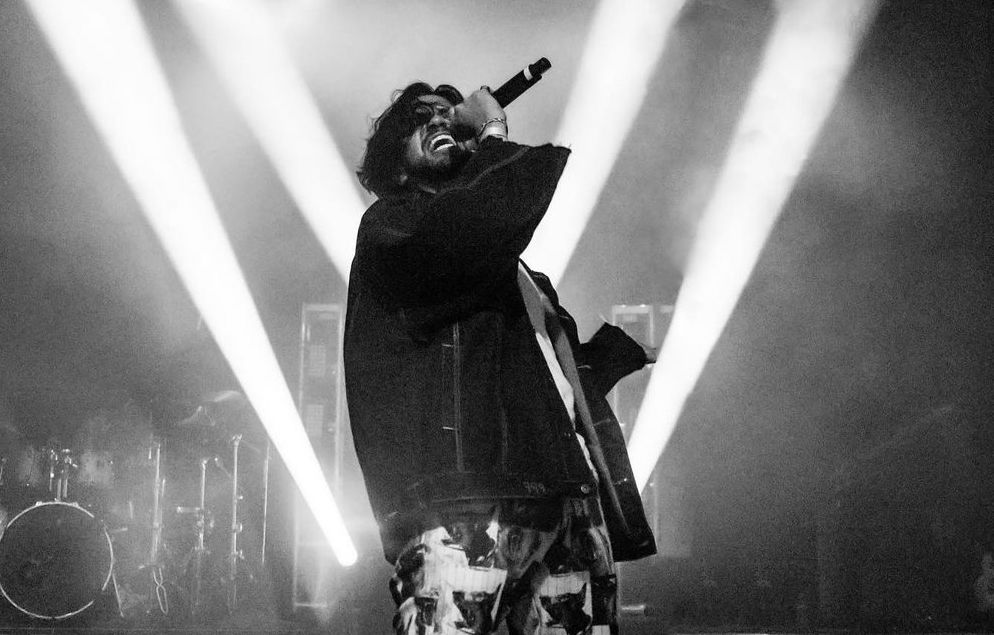 On Friday, November 12th, Aries and friends presented the first annual Wunderworld Fest in Aries’ hometown of Orange County, CA. He announced the festival less than two weeks prior to the event, so fans scrambled to get tickets and make travel plans. Despite this quick turnaround, supporters from all over the country showed out. At one point, the crowd discovered a fan from Kansas, which started an echoing “Kansas! Kansas! Kansas!” chant. Aries put together a top-tier line-up, featuring friends and collaborators like Ramzoid, brakence, and Tobi Lou, all of which put on an incredible experience.

The venue, The Observatory, holds a special place in Aries’ heart since he grew up seeing shows there. Headlining this festival was likely nothing short of a dream come true for him. The show was held in promotion of his new album Believe In Me, Who Believes In You on the same day the album dropped. Aries had hinted at this project for what felt like an eternity, and started building up more anticipation with the release of its first single “FOOL’S GOLD” back in November of 2020.

The event itself was truly unforgettable. The artists brought their A game, the venue worked flawlessly, and the fans kept the energy up. I’d say the crowd was right in that sweet spot between “eh” and completely out of control. If you haven’t heard of Aries, I’m glad I can enlighten you. The producer, rapper, songwriter, and whatever else you want to call him has grown a dedicated fan base over the last few years and doesn’t show any sign of slowing. This album sets him up for continued success as he begins his world tour in early 2022.

For now, as the article’s title suggests, I’m going to break down each performance at this year’s Wunderworld Fest. Spoiler alert – they all killed it.

Sometimes openers don’t get much attention. They come on stage but people in the audience carry on conversations, hit the restroom, make a trip to the bar, you know the vibes. That was not the case here. Ramzoid started his set and immediately turned heads. He opened with “9 LIVES," a bass-heavy track that strategically combines hip-hop and electronic influences. By the way, when I say “bass-heavy,” I mean my teeth were rattling for the entirety of the song.

The Canadian producer is a longtime friend of Aries’, so it’s only right that he made an appearance here. He also co-stars in Aries’ recent “RIDING” music video. He came out wearing an oversized crew neck sweatshirt and showing a quirky but confident demeanor. If he hadn’t mentioned it, I never would’ve guessed it was his first live performance ever. He brought things home with his top-streamed song “BALL & CHAIN” and left the crowd buzzing and ready for the rest of the show.

The Atlanta rapper might not actually deliver mail, but he sure as anything delivers a good time. Tom came on stage ready to go. He took command of the room immediately, and people listened to what he had to say, even when he wasn’t playing a song. After a song or two he told the audience to give their neighbors a high five and look out for each other, then got right back to it. Halfway through the set, Tom left the stage and climbed into the crowd. He led a mosh pit for that next song and his energy truly rubbed off on everyone around. I was also shocked at his breath control with some of his faster rap songs. He seemed to have lungs of steel. Maybe I just need to do more cardio.

I’d be wrong if I didn’t tell you to check out his new single “NOTHINGTOLOSE” produced by yungspoiler. It’s much more introspective and pop-punk than some of his older releases, and I literally cannot stop listening to it. The track dropped on the same day as the event and is part of the rollout for his upcoming album SV2.

When he opened with his popular collab “Antisocial 2," it was obvious SSGKobe showed up to rap. With crowds moshing, harsh vocals, and trap beats, his first songs felt straight out of the 2016 Soundcloud era. He started out with aggressive rap songs, driving fans to mosh and cheer at punchlines. He even brought a kid on stage to hype up the crowd. As the set went on though, the songs took a bit of a left turn, and it seems his music has done the same in recent years.

After a handful of hard rap tracks, Kobe started playing more catchy, melodic tunes. In his latest release “Caddy," Kobe’s vocals float over a much slower and trippier beat than the ones he started the set with. His next few songs sounded almost reminiscent of PartyNextDoor or Juice WRLD. After playing several unreleased tracks and hinting at an upcoming project, I’m excited to see what the future holds for him.

Deb had big shoes to fill after an energetic set from SSGKobe and leading into a highly-anticipated brakence performance, but she clearly didn’t let it get to her. She came out with an incredibly calm demeanor in a hoodie and baggy pants (she looked really comfy tbh). This appearance was perfectly in line with her music. Simply put, it’s peaceful. Even when lyrics discuss emotional or aggressive topics, the overall sound stays composed. At times she sang with a blank stare or with eyes shut, and it totally worked.

For a song or two, things picked up big time. She had everyone in the crowd singing along to her heartbreak anthem “Sorry” and commercial hit “Stone Cold." Superfans in the front row were going bananas. It went the whole nine yards. For the most part thought, she didn’t need the crowd to go rage-mode, because that’s not who she is. She leaned into her brand and delivered a picture perfect “everybody get your lighters out and sway back and forth” set. If I were you, I’d try to get my hands on tickets to one of her upcoming shows. Just days after Wunderworld Fest, she embarked on her 17-stop tour across North America and Europe.

This set was ten times crazier than expected. The 19-year-old Ohio native walked onstage alone with only a guitarist and DJ sound board by his side. The crowd was beyond ready for his appearance, and it was clear he was the reason a number of people came to the show in the first place. He opened with “dropout," a song from his album punk2 that initially blew up and got a second wind from the release of its remix featuring blackbear. The audience recognized the song from its first guitar note, and they proceeded to sing every word at the top of their lungs.

When he performed “rosier/punk2." I seriously thought the speakers were going to blow. Not only did this track highlight his unconventional self-produced beats, it showed how dynamic he is vocally. Without loud recorded vocals playing in the background, brakence showed how effortlessly he can switch from singing falsetto to full-on belting out lyrics and sound great throughout. The entire crowd cheered and sang along while he was on stage, and even Tom The Mail Man came back out to watch. The wildest part of all this? It was only his second live performance ever.

Nigeria-born, Chicago-raised Tobi Lou has literally been around the world and lived to tell the tale. His music is hip-hop inspired, but feels more funky than that. Try listening to “I Was Sad Last Night I’m OK Now” and not bopping your head, if not your whole body, to the beat. He knew how to put on a show too. He knew how to get the crowd's attention, how to get them singing along, and how to hype them up.

Halfway into the set, he had taken off all of his clothes except sweatpants and a bucket hat… and the crowd loved it. This dude is jacked. I don’t know who you are, or what you look like, but just know Tobi Lou could kick your ass. He finished his set with fan favorites like “Buff Baby," which had initially popped on TikTok. For someone who came into the spotlight in recent years, he put on an extremely confident and cohesive show.

The 23 year old came on stage with the confidence of someone well beyond his years, and he started the set with the album’s lead single “FOOL’S GOLD." About 30 seconds into the song while the crowd was roaring, he slipped and likely obliterated his tailbone, but played it off like nothing happened. He rocked a pair of New Balances and a custom Wunderworld denim jacket that he wore the entire time, and I don’t want to know how sweaty that thing got. Not only did he play his entire new album, he performed songs fans were dying to hear like "RACECAR" and... a cover of “A Thousand Miles” by Vanessa Carlton?

For an album that had been out less than a day, the crowd knew the songs absurdly well. They really seemed to know every word to every song of his, period. Even deep cuts from his WELCOME HOME album like “AMY’S GRAVE." The others on stage with him did not disappoint either, at times we heard impressive drum sequences and wild guitar solos. He even brought out his boy, tsubi club, to perform a song and hype up the audience.

The crowd lost it when he came back for the encore, “SAYONARA." By the way, what a great title for a closing song. Everyone at the venue was exhausted but gave it everything they had left. Ramzoid came back on stage and ended up crowd surfing, Aries’ brother dove into the crowd, random people were getting lifted up and passed around. It was truly a sight to see. And a testament to the culture Aries has created around his music. His supporters love him to death, they love the songs, and they love each other. Everybody who came that day left with a smile on their face and stories they’ll tell for years.

The event was incredible. It was planned and executed with such purpose, and it showed. Every artist in the lineup crushed their set, and I can’t think of a song the crowd didn’t vibe with. You might call this a “no-skips show." Or maybe not, I’m just spitballing. Anyways, I had a great time. I’ll see you at the ~second~ annual Wunderworld Fest next year.

Aries Announces New Album 'BELIEVE IN ME, WHO BELIEVES IN YOU'

Aries Reflects on Youth Culture in "KIDS ON MOLLY"