Blu Detiger and Her Bass is Against the World in U.S. “Blu DeTour” [Show Review] 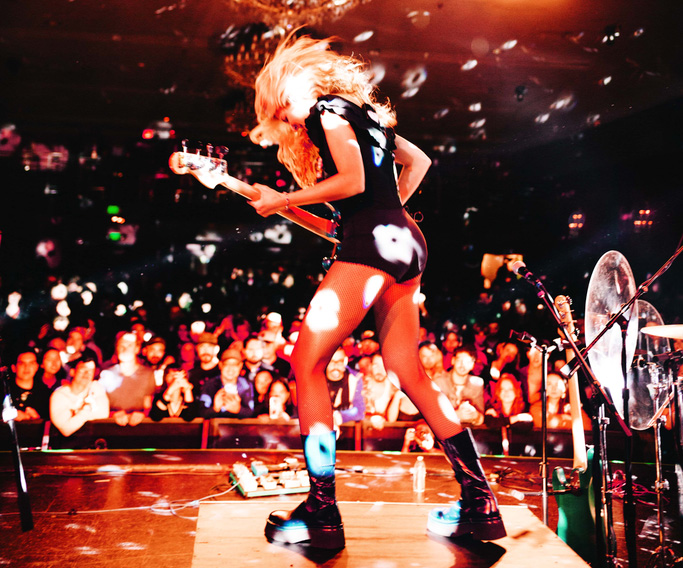 There are a few positions in a career field that, when held by a woman, can elevate and empower other women. Women in politics, women in STEM, and now, I am sure, women holding a bass guitar onstage. Blu DeTiger is something to behold- a lion’s mane of blonde hair, an impressively tall stature and absolute confidence (but not arrogance) on stage. Blu DeTiger, a 24-year-old funky pop star, is making waves in the industry because of her knack for songwriting and her invincibility on the bass guitar. This year has already been a big one, with Blu peppering festival stages across the U.S., and next year promises new music – and the anticipation of an even bigger takeoff.

The Blu DeTiger show in LA kicked off at the El Rey Theater – a favorite in Korea Town – known for its red interiors and empanada station attached to the venue. The set design team rigged a Quadruple-disco ball rig to the stage ceilings, causing a reflective smattering of blue and white light across the room. Tiffany Day, Blu’s stellar supporting act, opened the night and played her slew of recently-released singles (Tiffany does not have her debut EP out yet, but has been the talk of the hipper portion of the music industry, similarly to Blu).

Blu arrived on the stage in an all-black ensemble and a sparkling-blue bass guitar. She played several of her gorgeous synth-pop melodies and showed off her mastery of the bass in a few solo moments. Impressively, on her first ever tour, the disco-pop artist had Chromeo in her back pocket as a surprise guest. The trio took the stage, with Blu and Dave 1 intertwining their basses and P-Thugg DJing on stage. Blu and Chromeo had previously collaborated on two songs, “Bluetooth” and “enough 4 u”, and hearing the product of the three of them putting their heads together was a beautifully overwhelming mix of synth-jazz and soul. Even after Chromeo’s guest appearance ended, Blu Detiger filled the stage with her big personality and command of her audience.

Looking at the tall, blonde artist holding a string instrument, It’s nearly impossible not make comparisons to Taylor Swift. Blu is a bit edgier, she is Gen Z’s modish reply to the mega-pop star. Blu differs from Swift in her choice to champion a bass over a guitar, and she leans more into funk and jazz than Swift ever has, which makes her more versatile for collaborations in house and funk music. In a nod to the inspired generation she grew up in, Blu sang a cover of Taylor’s “Style” before transitioning it into a rendition of Fergie’s “Glamorous” and MGMT’s “Electric Feel”. Another major highlight was when the singer inquired, “who here plays bass?”. An eleven year old fan named Marco was chosen and came upstage to play chords of Blu’s original song “Vintage” back to her.

In a beautiful encore, the dance-pop singer performed her hit song “Vintage” from her 2021 EP to an adoring crowd. “Vintage” is an obvious, glaring hit about admiration that has a continued potential to reach new levels of success. The intricate lyrics are breathy and longing, reflective and confident. Although her stage presence is dominated by her bass and her looks, Blu’s style of writing is her biggest ally when capturing the hearts of her fans.

Catch Blu on the rest of her U.S. tours supported by Tiffany Day as she heads East.