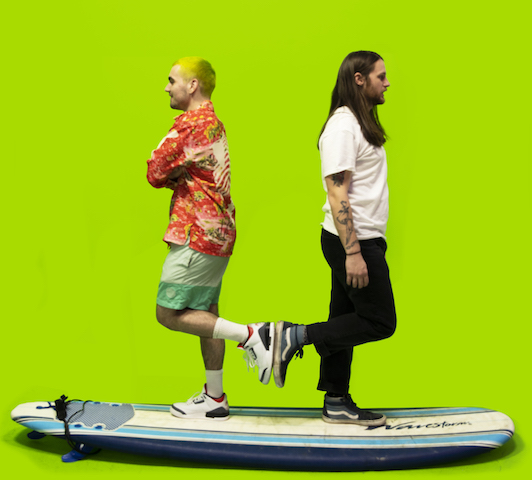 Every artist has a story to tell, but it's up to the artist to make people want to listen. For Queens native – Hadji Gaviota, unorthodox marketing tactics have worked in his favor, with the continued release of stellar indie/alt-pop cadences to back them.

For his 2021 return, Gaviota partners with New York artist Huck for a playful surf-rock indie chorale, that suitably belongs as the official theme song of the "Baywatch" series. Further playing on the surf theme, Hadji is seen mock-surfing behind a green-screen, capturing the jolly personality of the track and Hadji himself, in the Adam Ginsberg captured video. Right off the bat, the song ropes the listener's attention in with moody guitar chords and an easy to learn chorus, balancing the production with the story-line like a surfer to their board. Hadji sings,

"Riding on my new board,

Hoping to forget bout you.

I was just your mood board,

Now you're on to something new."

About a minute into the track, there's a beautifully abrupt, 180 degree switch up, giving the track a "slow and reverbed" mood change, elevating the emotion deep-rooted behind the sunny-indie front the song begins with. "We started with the surf rock-style first half, and we wanted to do something abrupt and cool, so Huck went crazy on the chords for the second half. I originally had that hook only on the second part, and when I tried it over the first section, we realized it was such a cool way to bridge the two parts together," says Gaviota.

This match of creative song-writing and versatile production, makes for an addicting add to your daily rotation. Keep an eye out for these east-coast indie-rockers' next moves as they build up their dedicated fanbases along the way.

19&You Battle Between Their “Head/Heart” in Latest Single