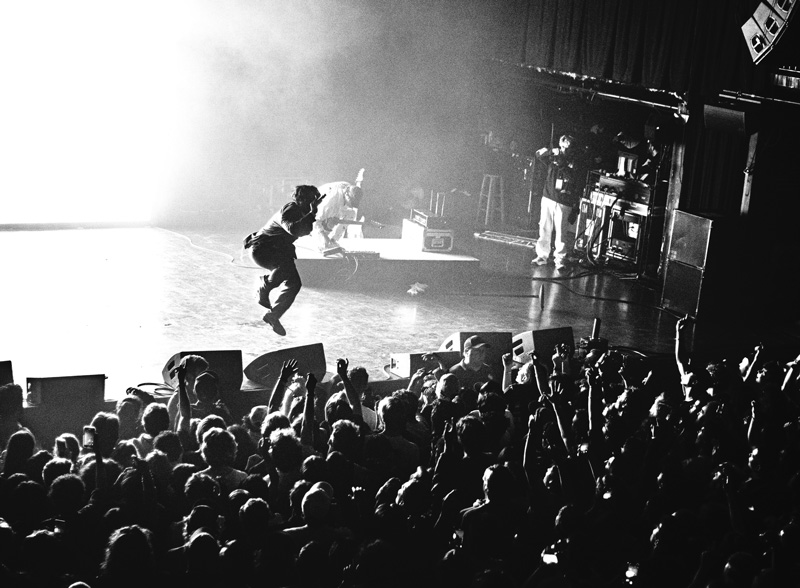 Although Aries hasn’t dropped new music since his 2021 masterpiece album, BELIEVE IN ME, WHO BELIEVES IN YOU, the hype around Wunderworld Fest 2022 was still immense. Especially because last year’s festival was on the West Coast of the U.S., bringing the tour to the East Coast made it all the more exciting for fans.

Openers aren’t always given a proper reception at concerts for one reason or another, but for each of underscores opening acts at Wunderworld Fest 2022, this definitely was not the case. With confidence and authority, underscores successfully set the mood for the night.

Performing popular songs like “Spoiled little brat” and “second hand embarrassment,” underscores successfully got the crowd engaged early and made sure they knew what the expectations for energy would be throughout the night.

He’s not Michael Jackson, but he hit one of the cleanest moonwalks that Sheesh has ever seen at a live show. Oliver Malcolm brought his unique British energy stateside for Wunderworld Fest 2022 — he also wore a top hat during his performance in Boston, MA adding to the British flair of the multi-talented artist.

The highlight of Malcom’s set was his performance of “Martian Man,” a funky rock song that features off-kilter vocals and memorable instrumental. As soon as the pumping drums and rhythmic guitar came in, the crowd started jumping along with Malcolm. Soon after, Oliver Malcolm was in the crowd jumping around with the wildly energized fans, creating a brilliant atmosphere in the venue.

If you’re like me, you grew up watching incredible videos of young Quadeca perfectly executing impressions of popular artists. When I saw that Quadeca was going to be at Wunderworld Fest 2022, I was beyond ecstatic...

Luckily for those who attended Wunderworld Fest 2022, the Canadian artist dropped his highly anticipated album I Didn’t Mean To Haunt You, which added to the overall hype of his sets and had fans shouting things like “Album of the year!” at him.

Joined by a drummer and bassist, Quadeca’s sets were sonically full and did without excess processing. This made his performances feel raw, organic and full of emotion. One of the most special moments of Quadeca’s set was when he got an acoustic guitar, casually sat down in a chair and sang and played a beautiful tune that had all of the crowd's ears tuned in.

Quadeca quickly got the tempo going again when the familiar beat of “Sisyphus” started pouring out from the speakers. A massive portion of the crowd immediately started singing the lyrics with Quadeca while others resorted to moshing at the one-of-a-kind beat drop.

It’s true that midwxst has “mid” in his name, but all of his Wunderworld Fest 2022 performances were anything but mid. With some of the biggest mosh pits of the festival to midwxst’s larger than life stage presence, the rising artist displayed a complete performance for those who made it to any of his sets through the weekend.

Songs like “switching sides” and “Redacted” were the catalyst in massive mosh pits engulfing the entire venue. I’ll get into this a bit more later, but you know that you’re a good performer when other artists from the festival get into the pit with fans to experience your set.

Verzache’s affinity for lasagna is undoubtedly one of his most interesting characteristics. At the top of the list alongside his love for lasagna? Creating beautiful music and turning up while performing live.

Bringing a thoughtful mix of both upbeat and slower tempo songs, Verzache gave concertgoers a well-rounded tracklist that included some of his classic songs to some of his new music.

The best moment of Verzache’s set came when these notes came in: bum, bum, ba-dum. For those of you who are hip to Verzache, you would know that those notes are the first notes of “Needs,” one of his biggest hits. If you don’t know the song, go listen. Fans oohed and aahed, sang every lyric with him and even started some intense moshpits on the drop.

Also, I need to mention that we got to hear some songs from Verzache’s vault of unreleased music. All I can say is that if you love great music, you are going to love these songs when he finally drops them. Verzache ended his set with an unreleased song that turned into a massive mosh pit — which is what you’re going to want to jump into when you hear this music for the first time.

Any rational person would think that an artist who has only released one song may not be able to have a successful live show — but this can’t be further from the truth for Tsubi Club. Bringing unlimited energy and incredible graphics, Tsubi brought the house down with his set. He even performed the entirety of his highly anticipated single, “Laced Up” — you didn’t hear it from me, but it sounded pretty close to done.

Starting off with his well-known banger “burbank house,” Tsubi Club immediately got the crowd into his set as he ran from side-to-side while belting the song on stage. Next, Tsubi took the crowd by surprise by playing a cover of Grouplove’s smash hit “Tongue Tied.” Fans sang along, danced and moshed to Tsubi’s rendition of the 2011 song. Tsubi Club finished his set with “Laced Up,” which his fans already know most of the words.

While JELEEL! might look like an Olympic weightlifter, he’s definitely not. Instead of using dumbbells, he uses ericdoa’s to meet his workout needs. Past that, the Rhode Island born artist is surely in the right profession as he is quite the showman.

Starting his set in the most JELEEL! way possible, the Rhode Island-born artist ripped his wife beater off almost immediately, and did a majestic backflip that got the crowd going. A few songs later, JELEEL! climbed over the barricade into the crowd, formed a massive mosh pit around him. Mayhem ensued as JELEEL! perfectly executed a huge backflip while his DJ simultaneously played “RAIN ON YOU!”.

After performing his electric song “UNCIVILIZED! (GO!),” JELEEL! slowed the vibe down with a new song that featured large, melodic vocals and a simple instrumental. While this type of song is out of the norm for JELEEL!, he made sure to speak to the crowd about how he is more than just rage music. The song was received well by the crowd, and soon after, it was time to rage again. Next up on stage: ericdoa.

From spending time as an undercover fan in the pit during midwxst’s set to being bent-over-rowed by JELEEL!, ericdoa had a busy three days. With wild performances at each show at Wunderworld Fest 2022, the young superstar gave concertgoers all they could ask for throughout his set.

While taking a break between songs on-stage, fans started chanting “D-O-A, D-O-A, D-O-A…” showing their appreciation for the energy, passion and enthusiasm ericdoa brought with him.

To finish off his last set of the Festival, ericdoa went running off-stage, leaving fans perplexed to whether or not his set was actually done. It turns out that the Connecticut native went backstage, up a flight of stairs and onto a balcony overlooking the crowd to perform his last song of the night next to Tsubi Club — who ericdoa said is one of his favorite artists of the year.

Heartbreaking news was delivered to the buzzing Boston, Massachusetts crowd when ericdoa walked on stage to announce that Aries couldn’t make it to the show. Fifteen seconds later, Chester Cornelius III came running on stage to the tune of his alter ego’s song “RACECAR.”

One of the most entertaining parts of Aries' set was his rendition of “A Thousand Miles” by Vanessa Carlton. It may not seem like it’s mosh pit music, but Aries version of the song definitely is. At first, fans needed to feel out the vibe, then about three seconds later they started moshing to the song.

The craziest part of the entire festival was Aries' performance of his hit song “One Punch.” I kid you not, this was the largest build-up to a mosh pit that I have ever seen. The entire area of general admission was cleared out with concertgoers standing along the outside of the room. When the drop came — well my explanation won’t do it justice.

After Chester and his band walked backstage for what seemed to be the end of the concert, a Siri-like voice came over the speakers that told concertgoers that they had completed the journey to Wunderworld. Continuing on, the voice said “Goodbye… or in other words, Sayonara.” The crowd erupted as Chester and the band came running back out to perform one of his fan-favorite songs, “SAYONARA.”