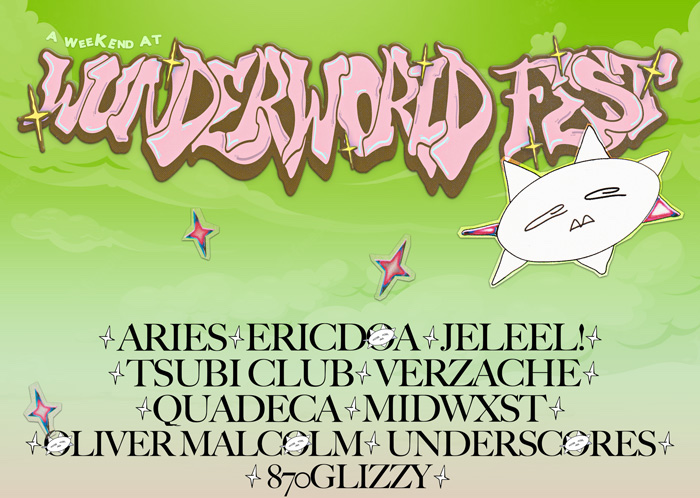 Aries just announced the dates and lineup for his second annual ‘Wunderworld Fest’, and if you aren’t drooling at the sound of this, then I don’t know what to say to you. ‘Wunderworld Fest’ is a music festival Aries first put on in his hometown of Orange County, CA in 2021. With performances from Aries and friends, it’s basically a theme park for fans of good music. I had a blast at last year’s event, and clearly it was a success, because Aries is back again this year with a new location and lineup.

2022’s ‘Wunderworld Fest’ will be held on three separate days across the Northeast, and features some of the biggest up-and-comers in the hyperpop, alternative, and rap scenes. The artists joining Aries this year will be: ericdoa, JELEEL!, Tsubi Club, Verzache, Quadeca, midwxst, Oliver Malcolm, Underscores, and 870Glizzy.

A week before releasing the full festival details, Aries unveiled Chester Cornelius III, a LinkedIn profile for himself with the job title "Weather Reporter at WUNDERWORLD FEST." Aries has always been in his own lane, so I wouldn’t have been surprised if he had picked up meteorology as a side hobby, but it quickly became obvious that this was part of the show’s announcement. Of course, I connected with him anyway.

The event will take place almost exactly a year after Aries dropped his second album, BELIEVE IN ME, WHO BELIEVES IN YOU, which Sheesh simped over in this album review. The timing of this second festival does make you wonder… is there new music on the way?

I can say from personal experience that these are shows you won’t want to miss. Nothing should stop you from going, not even inclement weather, because Chester Cornelius III has you covered. Pre-sale for tickets go live tomorrow at 10am EST.