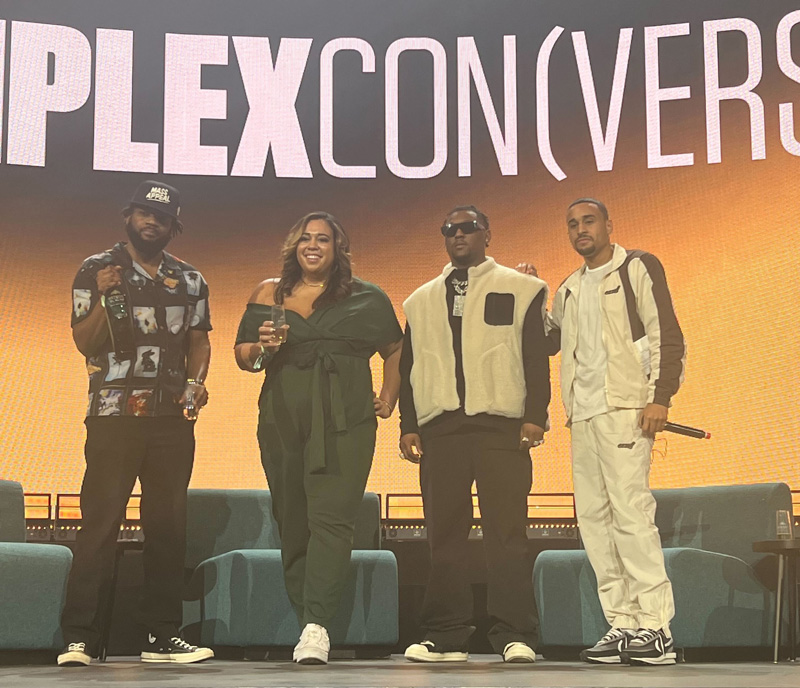 “At this point we gotta tell ‘42 and Casa Azul go to bed” the esteemed producer Hit-Boy says of his new partnership with Patron El Alto, the bottle of Patron dedicated to be consumed on the “good nights.” He’s onstage at ComplexCon with the beaming Jon Colclough, VP of Creative Strategy at Mass Appeal, and a very proud-looking Allie Bostwick, the Senior Director for Culture & Brand Partnerships at Patron. Allie and Jon are there to interview Hit-Boy on his rich history in hip-hop music and memories creating a single for Patron’s new “Mixed and Mastered” platform. The culmination of artistry and class onstage at ComplexCon feels like a divine pairing, the best of two worlds joining forces.

Behind the live interview going on, Hit-Boy’s Patron El Alto Booth stands in the center of the ComplexCon arena, unmistakable with the tens of tall blue bottles displayed behind the bar. Hit-Boy’s face papers the walls. Plaques the producer has earned have been mounted as decor, and a soundbooth stands at the edge of the set-up, where guests can wear headphones and watch an unreleased promotion of Hit-Boy in Mexico at the tequila factory and at his villa. The booth is bustling with fans- of tequila and Hit-Boy, thirsty to try the new top-shelf Patron.

“We put so much dedication to reach new heights with El Alto, and that’s what we wanted to do and that’s what Hit-Boy embodies” Allie states. Hit-Boy is a super-producer, with much of the panel consumed by his vast discography and collaborations with artists like Lil Wayne, Kanye West, Jay-Z, and other top-notch artists. In the world of producers, it doesn’t get better than Hit-Boy (he’s got two Grammy nominations just this year). Pairing Patron El Alto with the producer is a mark of quality, high-class, and if it follows the rest of Hit-Boy’s career- unprecedented influence and success.

Hit-Boy’s single with Patron’s “Mixed and Mastered” platform is coming out soon. As for Patron El Alto, “The Tall One,” the blue bottle can be seen atop Billboards all over and in stores near you.

Blu Detiger and Her Bass is Against the World in U.S. “Blu DeTour” [Show Review]