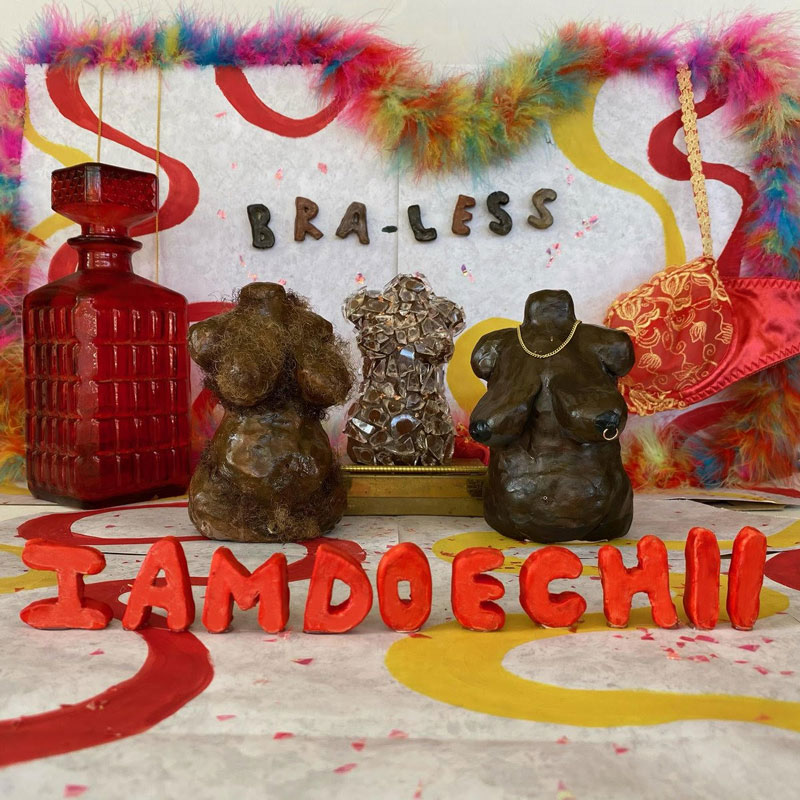 It’s been a few months since we last heard from rapper/singer Iamdoechii, but since releasing her EP Oh The Places You’ll Go late last November, things have been anything but normal. Her single “Yucky Blucky Fruitcake” went viral, and it’s pretty likely you’ve heard the song’s brooding intro (“Hi, my name’s Doechii with two i’s”) while scrolling through TikTok. With her vocal talent and affinity for clever songwriting, it is no surprise that Iamdoechii was able to have such a massive hit so early into her career. While “Yucky Blucky Freestyle'' showed off the darker side of her eclectic style, her newest project presents a much wider and versatile artistic vision. Released last week, BRA-LESS is the newest project from the Florida creative, and over the EP’s five tracks fans are treated to an iconoclastic upcoming artist who is truly in a lane of her own.

‍BRA-LESS sees Iamdoechii effortlessly flowing over a wide range of mixes and musical styles, a range so diverse that calling her “versatile” almost seems reductive. “Versatile” merely means the presence of a diverse style, but “dynamic” conveys mastery as well – and one listen of BRA-LESS will immediately show you why this distinction is important. How many rappers can you name that deliver grand-scale raps over stadium mixes like Iamdoechii on the eponymous “BRA-LESS”, and the next second create a dark and sultry club banger like ”SHIT”? How many of Iamdoechii’s peers can perform hard-hitting bars over a laid-back and sentimental mix like “PMS” one moment, and the next deliver a trap-R&B hit like “GIRLS”? Whether reflecting on her rise to fame, or the people that she finds herself involved with, Iamdoechii provides listeners with consistently thoughtful and witty raps that resonate long after the track ends.

In many of my conversations about Iamdoechii, I’ve noticed others are quick to draw comparisons – and while this is not a bad thing, it is important that we remain mindful of why we do it. Though Iamdoechii’s writing may carry occasional comparisons to Princess Nokia, or her performances to BigKlit or Azalea Banks – Iamdoechii remains the only person today making music like this. When we say that she’s the “next _____”, we unknowingly reduce her to the shadow of another artist before she is able to fully actualize herself in the creative sphere. Despite these comparisons existing, the only person that shares anything substantial in common with Iamdoechii, is Iamdoechii herself. Whatever she does with her career will be a noteworthy addition to hip-hop’s cultural canon, simply because Iamdoechii refuses to conform, and aspires to be different.

If you’re a fan of hip-hop, experimental R&B, or even electronic music, there’s no doubt you’ll find something to enjoy on Iamdoechii’s newest EP BRA-LESS. With the Florida rapper wielding a wide artistic register, she makes an incredibly strong case for herself as one of the most promising upcoming artists today. Though it may be a while until we get more tracks from her, BRA-LESS is certain to stay on your weekly rotation until then.

Join Peach Tree Rascals in Their Journey to 'Camp Nowhere'