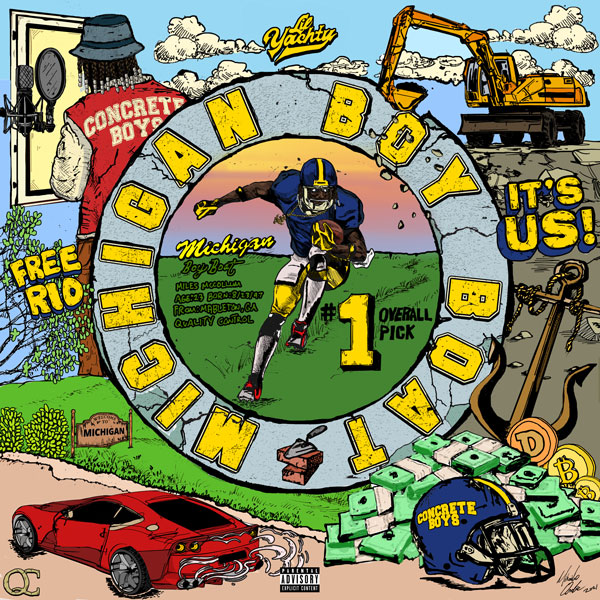 Last week, Lil Yachty released Michigan Boy Boat, his newest release since last year’s Lil Boat 3. Featuring a strong roster of Michigan artists, this time around Lil Yachty enlists upcoming acts from Flint to Detroit – and even a guest performance from Swae Lee. Five years and seven projects ago, Lil Yachty broke into the mainstream with his signature trap style that somehow combined lullabies and hip-hop music, but since then many of his projects have seen him switching up his style with mixed results. Luckily, Michigan Boy Boat stands alone as Lil Yachty’s most stylistically diverse record yet, with his risk-taking pays off on each of the project’s 14 tracks.

Gone are the halcyon days of Melodyne-laden vocal performances, as Lil Yachty delivers some of the hardest-hitting hip-hop performances of his career on Michigan Boy Boat. Departing from his usual repertoire in favor of a midwest intensity, Lil Yachty’s newest record shows that the young creative still has some tricks up his sleeve. Many tracks like “Dynamic Duo” with Tee Grizzley feature Yachty delivering rhythmically-off-kilter bars with his usual humor, but there is something new this time around. His delivery sports an additional dose of confidence and clarity, whether he’s rapping about his street credit or some "pussy so damn bald, thought it was make a wish" on “Don’t Even Bother” with Veeze and Baby Smoove.

Two standout tracks include the highly-anticipated “G.I. Joe” with Louie Ray, and “Never Did Coke” with Swae Lee. The former makes a strong case for Yachty’s unparalleled ear for great beats, with the two rappers delivering melodic raps over a mix so bass-heavy, that it made me wish clubs were open right now. The latter sounds much more like a random Yachty drop on SoundCloud, but in the best way possible. Swae Lee pulls no punches, delivering one of his best verses in recent years, while trading bars with Yachty over an infectiously bouncy beat. The end result is an absolute banger, though it’s hard not to crack a smile hearing Yachty’s laid-back delivery of lines like “Me and Swae top three, and we not three”.

Though some may advocate against Michigan Boy Boat’s feature-heavy tracklist, there is no denying that Yachty’s many guests amplify his style, lending a sense of cohesion to the chaos. Even the project’s last track “That One” (which sports five guest artists alongside Lil Yachty) is simply just a fun track to listen to. This is arguably what Lil Yachty’s music has been missing in recent years, thus making Michigan Boy Boat more than just a good project – it’s a return to form.

Every year Lil Yachty releases a new “Birthday Mix” on SoundCloud, a 20-minute mix full of eclectic tracks that often has left fans wondering if Lil Yachty would ever treat them to an album with similar energy. Thankfully, Michigan Boy Boat seems to be the answer to our prayers. Over the project’s 40 minute runtime, Yachty takes listeners into his world and introduces them to some of the most prominent Michigan acts today over some truly idiosyncratic beats. Though I’ll always hold 2016’s Lil Boat in my heart, you won’t hear me complaining if the future of Lil Yachty’s music is full of albums like this one.