Hadji Gaviota Breaks Down the Tracks off His New EP, 'PASTIMES' [Exclusive] 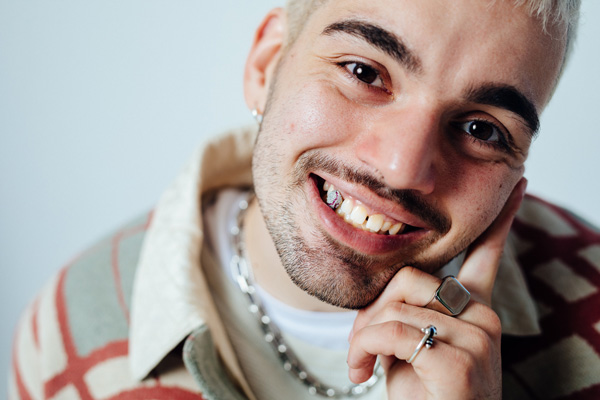 Queen's resident, Hadji Gaviota has been on a mission – to pump out consistent indie-infused anthems all of 2021. What you may not have known, is he was steadily building towards his EP, PASTIMES, showcasing some of his best work to date. Gaviota is a true creative, creating his own momentum with a grassroots route from his community in New York. Personality is his last name, and it's clear Gaviota moves with intention, constantly looking for ways to be different. For this project, we wanted to dive into the mind of Gaviota, as he walks us through the inspiration behind his latest EP below. Welcome to Hadji Gaviota's PASTIMES.

This was the first song from PASTIMES to exist, and Mike Mroz and I wrote it in August 2020. We've written a ton of songs together and our best ones usually come from our "camps," when we would drive somewhere upstate or to Long Island or something to write for a few days. This was how we first made "Harajuku," and on a separate trip, we once wrote "46th & Bliss," "4049 SPRUCE" and "Hittin' Different" in the span of like three hours. Anyway, because of the pandemic we couldn't really travel so we just did this one in my house. We wrote "OYSTER" at the end of the first day and it was all really natural.

Mike and I wrote "FIT PIC" in October 2020. On the surface, it's a song about clothing brands and style but it's really about things like nostalgia and self-image. The opening of the first verse, "Abercrombie polo on the first day of school" was the first line I had, and then I name-dropped my actual middle school crush, Laila. I haven't talked to her in like over a decade so it would probably be super weird if she hears this but whatever. If you're reading this, hit me up!

This one, Mike and I wrote in December of 2020. I had the beat first and once I came up with the vaccine line, the whole song kinda wrote itself. It was originally just the opening line and nothing else, and Mike was like "dude, there's no way you can only say that once in the song!" so it became the hook. I had been listening to a lot of SAIAH and the song really matched their energy, so I sent it and they sent back a verse super quickly and killed it. In fact, they sent me one verse that I loved, and then when I got the stems a few weeks later, it was a totally different, even better verse! SAIAH is an absolute legend.

This one was also December of 2020, it may have even been the same day as "HETEROCHROMIA" or at least the same week. I had Mike cook up a few beats and I took this one home with me without anything written on the track besides the vocal effects in the hook. It was actually the day that PURGATORY came out, I believe, or the night before. I was feeling on top of the world, or maybe I just was nervous about the drop and I wanted an escape, so I opened the session at home and ended up writing the first verse. We finished the whole thing before 2020 ended.

This is the newest song on the EP, and Richie Quake and I wrote it together probably the first week of January. It was the first time we had ever met for a session, and when we started it, the song was totally different from what it sounds like now. We had some doubts about it and we were about to scrap it and start something new when Richie stepped out to grab his Thai food. He came back in like "Fuck it, I have an idea" and stripped the whole beat and played the awesome acoustic guitar that became the backbone. In the last few months when we decided to tack it on to the EP, I took it to Mike who did some mixing and mastering and also added the random 808 in the chorus (I was really inspired by "Del mar county fair 2008" by underscores for that decision). This song was something new for me and I'm glad it ended up making it!

99 Neighbors Are the Hip-Hop Group to Watch with the Release of Their New Track, “49er”